For the second year in a row those were the words heard by Lisbon, defeating cities like London, Paris or Rome also competing in this race. And why, you might ask?
Why was this small city, when compared to those big cosmopolitan cities and almost unknown in the United States, chosen?

Well it's simple, Lisbon has the best that a City Break has to offer, Culture, History and Climate. 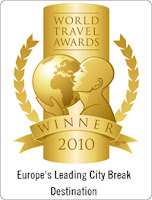 Culture in Museums such as the Museu Nacional de Arte Antiga which is the most important museum in Portugal as well as being among the most important in Europe, it is the best museum that can help you understand the development of Portuguese art prior to the early nineteenth century.
Culture in Fado, per excellemce the song of Lisbon, which can be traced from the 1820's, born of an unique emotion, of a soul that can't be explained, only felt. In the old days this song could be heard throughout  the narrow streets of Bairro Alto and Alfama, now only in Fado Restaurants, where you can "hear and taste" some of Lisbon's Culture.


History can be found in Monuments such as the Padrão dos Descobrimentos a monument that celebrates the Portuguese who took part in the Age of Descovery, of the 15th and 16th centuries. Also a landmark on Portuguese history is the Torre de Belém, an UNESCO heritage site that played an important role in the Portuguese maritime discoveries.
And finally Climate,  a sub-tropical Mediterranean weather, with mild winters and warm to hot summers. A city where you can seat outdoor Café Brasileira almost all year to have that special coffee in the "company" of Fernando Pessoa, and not worrying about the rain. Or be able to visit the old city by foot, without the need of carrying an umbrella.

Pleasure like these cannot be enjoyed in many cities across Europe and it made Lisbon a Leader in City Break Destination.