Here are a couple of reasons why the “Castelo de São Jorge” should be on your Bucket List during your next visit to Lisbon.

Considered as one of the most symbolic monuments of Lisbon, Saint George’s Castle was part of some unique moments in Portuguese and particularly in Lisbon’s History.
The name emerged as a gesture of gratitude as many crusaders were devoted to the martyr St. George.
Nowadays, "Army Day" (the day of the conquest) is celebrated, on October 25th and St. George is a patron of the Portuguese Army.
During the Christian conquest of the Iberian Peninsula, the forces of D. Afonso Henriques attacked this fortress, which surrendered after three months. A myth that later arose, states that the knight Martim Moniz, stood out during the siege. After realizing that one of the castle’s gates was opened, he sacrificed his life sticking his body between the doors to stop the Moors from closing them, allowing access to the castle and thus victory to his companions.
The earthquake of 1755 contributed to the decay and degradation of the monument. Classified as a National Monument in 1910 it received significant repairs in the 1940s and late 1990s which helped restoring the monument and recovering its medieval traces. 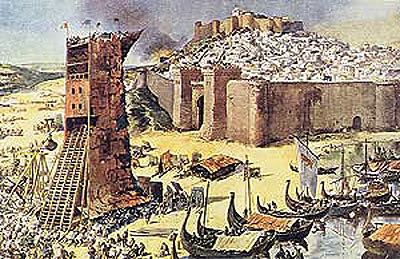 It is currently one of the most visited monuments in Lisbon. It also features gardens, beautiful sights, the castelejo (the highest point site), an archaeological and museological center, and a periscope in Ulisses’s Tower which allows us to admire the city from a 360º perspective.
Another good reason to visit the castle is the restaurant “Casa do Leão”, with a splendid view over Lisbon. It is located where, in the past, the lions brought from Africa were kept. The restaurant is well-known for a sophisticated understanding of traditional Portuguese gastronomy.
If you’re thinking about the journey to the top, don’t be troubled. There are cable cars, like the famous 28 which can take you up there. On foot, the experience is even more spectacular and during summertime the castle is opened until 9 p.m., allowing you to enjoy a view of Lisbon by night.

Labels: About Lisbon See it from your room