The Christmas Village conquers the heart of Lisbon

A magical area occupied by elves, reindeers, Roman soldiers, kings and, of course, by Santa… the Christmas Village is the newest and enchanted village, just settled in Parque Eduardo VII. 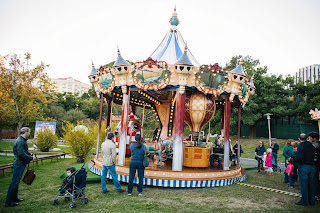 The Christmas Village wants “to fill the heart of Lisbon with magic ". At the roundabout adjoining the Marquês de Pombal, and for the first time in Lisbon, this theme park aims to become “one of the greatest Christmas themed events " ever made ​​in Portugal. It opened doors on November 29th and promises holiday emotions until January 6th.

In addition to its own inhabitants during this period, the Christmas Village also features an "enchanted forest”, “pine trees with snow shining” and haystacks to receive the baby whose birth is celebrated every year. Here will be recreated the birth of Jesus, using a live nativity scene.

In this Christmas event, “the children will be the privileged ones”, with an area with a size roughly equivalent to two football stadiums, this village aims to be "the stage of a magical universe" that involves the imagery, history and Christmas traditions. There is still time and space for theater, concerts, workshops and short stories, a Giant Snow Globe, a Carousel, a Christmas Train or a Food Fair.