Portugal its land and people, by W. H. Koebel

This week we received a magnificent gift from a Dear and regular Guest, a copy of a book written in 1909 by W.H. Koebel.  In this book Koebel writes about his experience after visiting Portugal. The writer draws a great portrait of Portugal at the time, describing with huge detail our culture and our way of life, in a journey that takes us back in time.

In the book, Portugal its land and people, the author dedicates a couple of pages to the Avenida Palace, praising our unique characteristics and location and stating “there are few hotels in Europe to which the Avenida Palace does not stand as an imposing rival”.
Koebel also brought up the famous back door which connected the hotel to the Rossio train station. Of course, at the time, he didn’t know that the passage would eventually play an important role in Lisbon’s espionage life, during World War II.

This donation will now be a part of our exhibition, and will join other items, gathered throughout the years, and that are also part of our history.
Below you will find a reproduction of what was written in the book about the Avenida Palace, hopefully, you will enjoy it as much as we did. 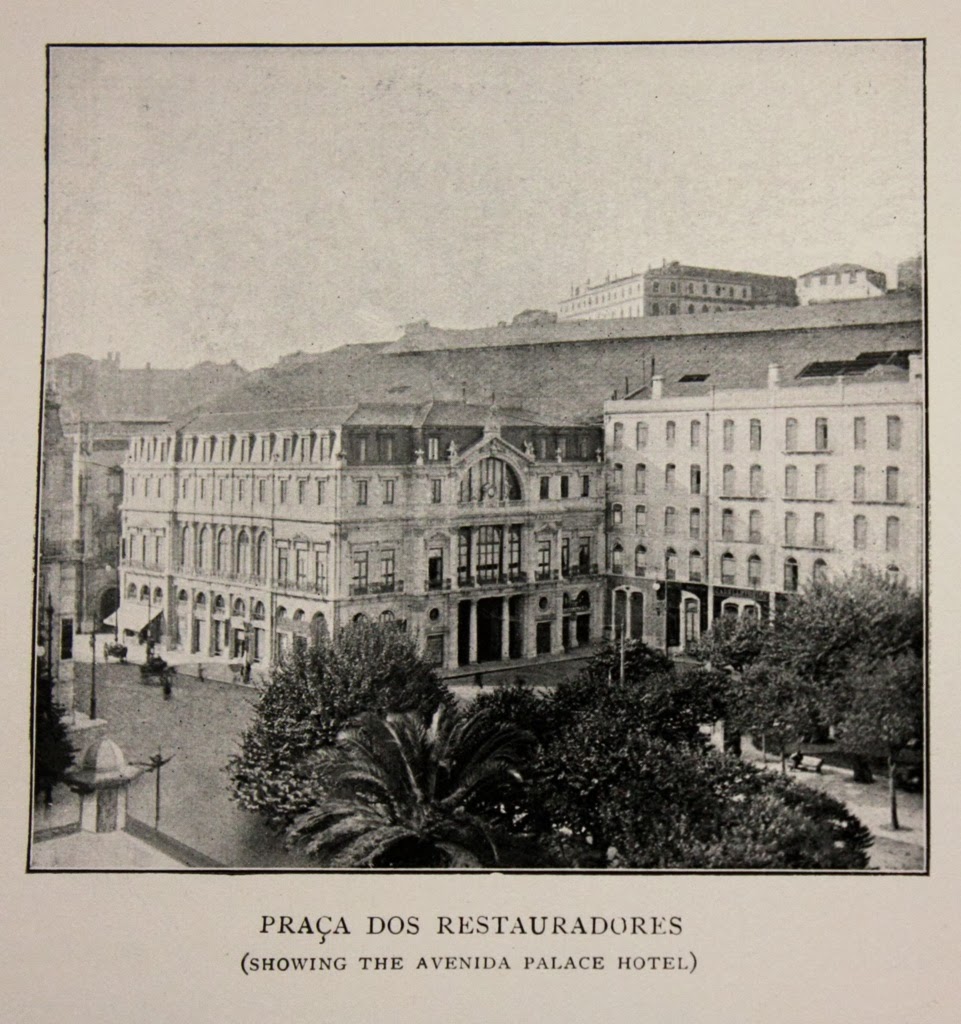 “There is, indeed, no little evidence of luxury in the capital, and, owing to the heavy scale of duties upon every import, luxury is only obtainable at a greater cost than in the majority of lands. The casual traveller, it must be said, is comparatively unaffected by these conditions, since the necessity for purchasing the most heavily-taxed articles seldom arises. The hotel charges, too, although those of the most important are on a par with the tariff of the better-class London establishments, are moderate enough when all things are taken into consideration.

Of these Lisbon hotels the leading two are undoubtedly the Avenida Palace and the Bragança. Both, although conducted on entirely different systems, are excellent of their kind.

The Avenida Palace – late, the International – is an establishment of quite the first rank. The last word in Lisbon hotels, its fine building is situated by the railway station in the very centre of the town. With its great halls and reception-rooms brilliantly illuminated; decorated, moreover, in that sumptuous fashion that is characteristic of the quite modern hotel, with its lifts and bevies of uniformed attendants – there are few hotels in Europe to which the Avenida Palace does not stand as an imposing rival. The building, moreover, is peculiarly fortunate in its situation, with one front giving as it does upon the broad central Praça, and another upon the Avenida itself that commences at this point. From the first one may watch the life of the capital as it eddies and halts in the Praça; from the second is revealed nearly the entire stretch of the famous Avenida, trees, gardens, and all –a vista that can scarcely be surpassed by any other of its kind. The Avenida Palace is fortunate in possessing a private entrance from the railway station, by means of which, if arriving by train, one may pass directly into the building. A really excellent string band plays here in the evening, and the Sunday afternoon-tea concerts have become quite an institution with the residents of the town as well as with the guests. With all these advantages, and with those in addition of a first-class cuisine and of an extremely attentive management, the hotel is most confidently to be recommended. Indeed, the Avenida Palace is a very magnificent tribute to the spirit of modern enterprise that has become so marked a feature of the country within recent years.”
Labels: About Lisbon News