It started with the perception that there was a gap in Lisbon’s tourist and cultural routine: few spaces to hear the music of our city. And so “Fado in Chiado” initiative was born at the hands of Genius y Meios, an event planner. Five years later, on March 5th, the balance is positive: more than 1450 performances and 100 thousand spectators. 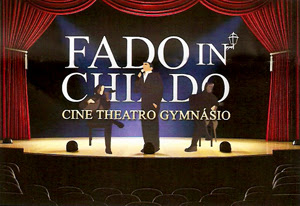 It is at the Cine Theatro Gymnasio that, from Monday to Saturday, that you can listen for 50 minutes, the voices of Mafalda Taborda and André Vaz accompanied by the viola of Paulo Ramos and the guitar of Fernando Silva chords.

It is, according to the organization, a journey throughout the history of Fado, intentionally in a female and a male voice. A trip through the “universe of taverns, alleys, palaces ... the imagination of pain, of loss, of everyday life, the joys and achievements” of the Portuguese people.

"It was a five year of promoting and raising a heritage which, meanwhile, has been recognized worldwide”, says Genius y Meios, referring to the fact that “Fado in Chiado” has received TripAdvisor Certificate of Excellence 2013.