Today we return to the topic Streets of Lisbon and this time with a big one, the world-famous “Rua Augusta”. 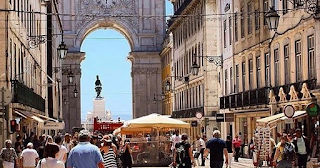 Not all blocks were even built and the main trading activities for the streets in the downtown quarter were already defined, based on a street by the trade organization.

The “Rua Augusta” was intended to house the merchants of wool and silk and to honor the "Augusta”, the respectful and sacred figure of King ”
D. José I”. It is one of the main streets in the downtown area and perhaps the most important link between "Praça do Comércio" and "Praça D. Pedro IV" (aka Rossio).

In 1780, those who walked from "Rossio" to "Praça do Comércio” through "Rua Augusta” could count 123 stores open. Those days, the street had a characteristic color, due to the wool and silk cloths, displayed in the windows and doors of its establishments.

referred to “Rua Augusta” as a “high-class street ", from which one could see the “Castelo São Jorge” from one side and from the other the district of “Bairro Alto”. The passage to "Praça do Comércio" is made through the majestic “Arco da Rua Augusta” whose name reveals the importance attributed to it. A monument we will write about in the future.


This grand street, with its impressive shops that every day extended their awnings over the sidewalk, and opened their showcases, was also an area for "high finances". In the late nineteenth century, the street already showed a busy facet, with people of all social classes visiting the street for shopping, or just strolling, enjoying the latest in fashion.

Since the 1980's the street is closed to traffic and it is often occupied by street artists, craftsmen, and vendors.

Along its path, there are outdoor tables from the local restaurants and tourist shops and also one of Lisbon’s best museums, one we already wrote about: MUDE the Museum of Fashion and Design.

Labels: About Lisbon Streets of Lisbon