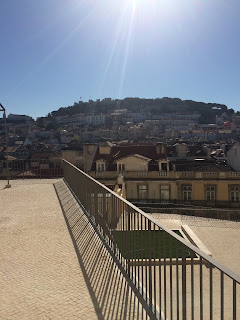 Lisbon has won a new “balcony” over the city. Inaugurated on June 10th, the “Terraços do Carmo” includes, besides this new view point, a pedestrian connection between the Convento do Carmo and Rua Garret.

This was the final “stone” of a work designed by the architect Siza Vieira for the Chiado area, after the great fire which occurred there almost 27 years ago.

In fact, this is an expanded and improved version of the plan, as the construction of a new viewpoint on the terraces next to the monastery was not in the original project and where, until now, “storage sheds” used by the Police were located.

"The Terraços dos Carmo” were a not foreseen discovery although these terraces appeared sketched in a letter of 1850 by Filipe Folque, a Portuguese politician and military.

Chiado has changed a lot in 27 years but now, it is as good as new.
Labels: About Lisbon Concierge recommends