This Friday, the Centro Cultural de Belém hosts a concert by John Pizzarelli, who is presenting his latest album “Dear Mr. Sinatra”. 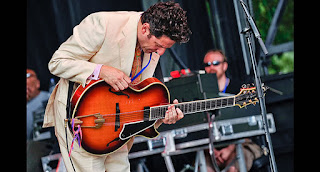 John Pizzarelli, is a world-renowned guitarist and singer, hailed by the Boston Globe for “reinvigorating the Great American Songbook and re-popularizing jazz.”

Established as one of the prime contemporary interpreters of the Great American Songbook, Pizzarelli has expanded that repertoire by including the music of Joni Mitchell, Neil Young, Tom Waits, Antônio Carlos Jobim and Lennon-McCartney. His themed shows, often performed with his wife Jessica Molaskey, suggest there is no limit to Pizzarelli’s imagination or talent.

Now, John Pizzarelli is taking his album “Dear Mr. Sinatra” on the road. “The Music of Sinatra Tour” is the name chosen by the artist in homage to “The Voice”. On this album, Pizzarelli plunges into Sinatra’s repertoire of songs that, nowadays, are considered to be true jazz classics, such as “You Make Me Feel So Young”, “Witchcraft”, “I’ve Got You Under My Skin” or “Nice’n’Easy”.