This is a show that aims to spread the magic of Christmas through the city. The theme, "Nicolau's New Palace”, addresses the concern for the environment, seeking to raise public awareness of the effects of climate change on the world and how it affect us.

The show tells the story that Christmas may be in danger, because of Nicolau's Palace, in the North Pole, situated on a slope near a snow mountain, which was completely destroyed by an avalanche.
With his palace and work shop destroyed, Nicolau has to find help as soon as possible. To do so, he'll have to start on a long journey through the various parts of the planet on his innovative sleigh - an iron machine with sculpted reindeer - at great speed. 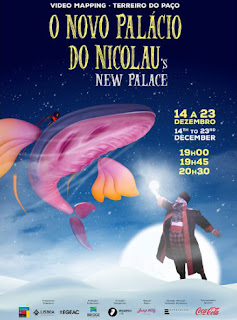 During the trip, Nicolau notes the first effects of global warming. Waterfalls have become sand cascades and where there were fertile fields, there’s now great dryness and desertification. The planet is not the same as before and the black mantle is everywhere.

Arriving at the South Pole, when finding the Ice Queen, Nicolaus realizes that avalanches will increase and be more frequent due to the temperature rise and if Man does not change his attitude the planet will suffer, even more, jeopardizing Christmas.

Projected on the facade of the Arch of Augusta Street, the video will also feature a number of mythical animals such as the flying whale, fluorescent anemones, and environments ranging from maritime to starry skies, forests with giant sequoias, lava volcanoes or reefs. In all these scenarios, Nicolaus' journey experiences what is happening to the planet, from the plastic island to the oil monster, to deforestation. Also, present in all these scenarios and to witness what is happening to the planet, there are a boy and a whale that will soften the effects and make the planet reborn from its "disease".

Finally, after having toured the world, the action returns to the North Pole, where Nicolau's Palace begins to be rebuilt with the help of the Ice Queen and her helpers - various animals, men, and believers. In the end, there is a great Winter Solstice party where Nicolaus invites animals and humans to his new Palace for a great celebration.

Designed for all types of audiences and aimed at all age groups, the free-entry show "Nicolau's New Palace" delivers a message about how a man reacts and treats the world where he lives, risking something as special as the celebration of this holiday season. It will also have a voice over narration, allowing the younger audience to follow the show closely, as small excerpts will be read in Portuguese.