Lisbon has much to see, a lot of cultural and historic richness that we’ll try to surmise. Today we’ll talk about what is traditionally regarded as the site of Lisbon’s founding settlement, the Castelo de São Jorge. 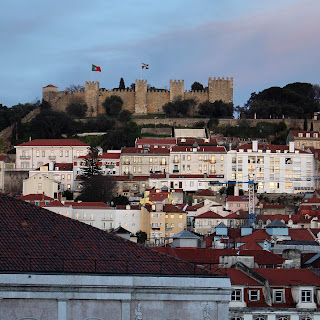 Every monument or museum has much to offer and it is impossible to write about all here, so we will give some pointers that will help you discover the best Lisbon’s has to offer.

Castelo São Jorge, is a hilltop castle from the Moorish era, captured by Portugal’s first king, Afonso Henriques, in 1147.

Restored in 1938, the castle offers some of the most attractive viewpoints of Lisbon, and these are the 5 top features not to be missed:

1 – Porta de São Jorge
This grand gate gives onto the final steep climb up the castle grounds. In a wall niche to the left is a figure of St. George.

2 – Statue of Afonso Henriques
This bronze statue of Portugal’s first king was added to the esplanade in 1947 and it is a copy of the original located in Guimarães.

On the site of the historic Alcáçovas palace, this museum contains a collection of artifacts excavated from the hilltop.

4 – Torre de Ulisses
In one of the inner battlement towers, a camera obscure attached to the periscope projects images of the city.

5 – Inner Battlements
The reconstruction of the inner castle is one of the great achievements of the 1938 restoration. With ten towers and a dividing inner wall, the restored castle matches, as far as possible, the original’s layout and size.