Here is the 2nd part of our Concierge's recommendations of what to know around the hotel, enjoy. 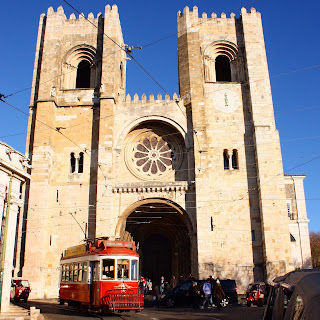 Baixa, or downtown Lisbon, is the heart of the city. The main shopping and banking area district that stretches from the riverfront to the main avenue (Avenue Liberdade), with streets named according to the shopkeepers and craftsmen who traded in the area. It was completely rebuilt after the Great Earthquake of 1755 with streets flanked by uniform, neoclassical buildings.


Lisbon's oldest building. Lisbon's ancient cathedral was built by Portugal's first king on a side of an old mosque in 1150 for the city's first Bishop, the English crusader Gilbert of Hastings.
From outside (with 2 bell towers and a splendid rose window) it resembles a medieval fortress, while inside it appears predominantly Romanesque, with a Gothic choir and ambulatory.

Overlooking the city from millennium-old walls
Saint George's Castle can be seen from almost everywhere in the city. Its oldest parts date from the 6th century, when it was fortified by the Romans, Visigoths, and eventually the Moors. It served as a Moorish royal resident until Portugal's first king Afonso Henriques captured it in 1147 with help of Northern European crusaders on their way to the Holy Land. It was then dedicated to St. George, the patron saint of England, commemorating the Anglo-Portuguese pact dating from 1371, and became the royal palace until another one (that was destroyed in the Great Earthquake) was built in today's Comércio Square. 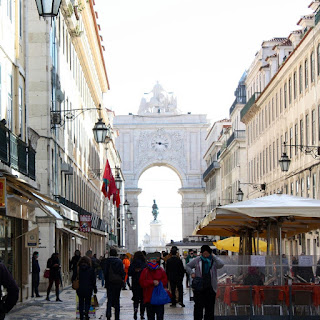 9.  Miradouro Nossa Senhora do Monte (Our Lady of the Hill Viewpoint)

This is the highest point in the city, and its serene atmosphere attracts young couples. A small image of the Virgin standing in front of a chapel dedicated to the Saint Gens overlooks the city.

Lisbon's monumental riverside square.
The vast waterfront square also is known as Terreiro do Paço or the "palace's square", is where the Royal palace stood for over 2 centuries until 1755, when it was destroyed by the Great Earthquake. The royal family moved to another residence in the district of Belem, and the new arcaded buildings acted as the port of entry to the city.
Labels: About Lisbon Concierge recommends