What to visit in Lisbon – Torre de Belém

Celebrated in 2015 its 500th anniversary, the Torre de Belém is one of Lisbon’s landmarks and one of the most visited monuments.

Built in 1514-20 by Francisco Arruda and designed by Diogo Boitac, this defensive tower is a jewel of the Manueline architectural style, combining Moorish, Renaissance and Gothic elements into an amazing whole.

When the tower was built, the northern river bank was by the Mosteiro dos Jerónimos and so the
tower stood on an island closer to the middle of the river, controlling the ships’ approach in a more effective way.

Described below are, in our opinion, the spots not to be missed when visiting the Torre de Belém: 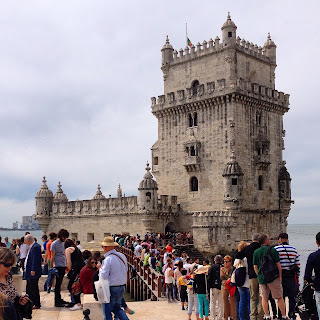 Governor’s Room
With a unique acoustics that amplifies the slightest whisper, this was where the tower’s governor discharged his duties. After it became obsolete, lighthouse keepers and customs officials use it as a working space.

Watchtowers
The Moorish influence is well noted on the watchtowers, their domes are seated on Manueline rope-like to a pile of small spheres reminiscent of the tops of chess pieces.

Virgin and Child Sculpture
A statue of “Nossa Senhora do Bom Sucesso” or “Nossa Senhora das Uvas” located in the “Terraço Baluarte” is facing the river, holding in one hand a bunch of grapes and a fig leaf. The image wished good luck to all of those who departed on the discoveries’ journeys.

Kings Room
A room that overlooks the main deck – comparisons to a ship are unavoidable here. The balconies on each side of the tower are pure Manueline. It is said that the kings liked to come here to view the arrival and departure of the ships.

Battlements
The merlons of most of the tower’s battlements are decorated with the cross of the Order of Christ, carved to look like features on a shield. The smaller merlons at the rear and on top of the tower are crowned with pyramid-shaped spikes.

Labels: What to visit