Ginjinha is one of the most Portuguese typical drinks and today, we’ll introduce you to it. Present in every market or any typical tavern, it has its “hotspots” in Rossio Square.

The morello tree had its origin in the Southwest Asia but was brought by the Romans to various places of their empire.

In Portugal, there are written references to its presence since, at least, the 1st century A.D.. In the 15th century, the use of the morello cherries was already very common in our country, either for fresh consumption or for medicinal applications. In the 18th century, due to conventual recipes, a handmade drink of morello cherries dipped into brandy started to be marketed. This experiment recipe later evolved into the well-known ginjinha (little morello, in Portuguese).

Nowadays, ginjinha is a liqueur obtained through the maceration of the morello (sour) cherries with sugar and aguardente (a Portuguese brandy), without preservatives. But still, it is frequently flavored
with other ingredients such as cinnamon stick or vanilla. It has a red or ruby color, it is fruit-scented, with velvety and sweet or bittersweet intense flavor. 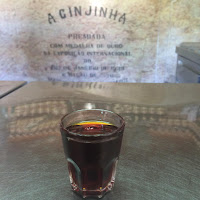 With an alcohol content of around 20%, it ought to be savored at a temperature of about 10°C, as a digestive, or simply whenever you feel like it.

Like other fado singers, the eternal Amália Rodrigues dedicated a fado song to ginjinha, praising it. It is a typical product of some Portuguese regions such as Serra da Estrela and Algarve, with a higher reputation in the regions of Óbidos and Alcobaça. In Lisbon, ginjinha is especially popular and it is one of the capital’s ex-libris.