In this second “episode” you will find out what was the purpose of building such a luxurious hotel and the context, social and political, surrounding the opening of the Hotel Avenida Palace. 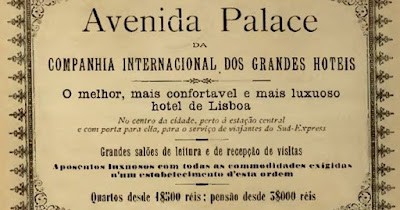 “The aim was to obtain a luxury hotel, worthy of the finest European aristocracy and wealthy bourgeoisie from all over the world. Rossio had already become the meeting point for prominent people, as well as the country’s political centre (the Café Martinho, where so many political and literary gatherings took place, was just in front of it). This is inferred from the excerpt of the “The Illustrious House of Ramires”, by Eça de Queirós, when the character Gracinha reads a letter which mentions the arrival of her cousin Gonçalo to the Rossio station.
“(…) it seemed a royal reception. We were more than thirty friends. Obviously, every one of our kindred was there; and if a revolution was to erupt that morning, the Republicans would capture the whole of the finest, good stock Portuguese nobility gathered at the Rossio station.”

At that time, Lisbon was going through a troubled period. The ultimatum issued by Great-Britain (following the Lusitanian intention to connect Angola to Mozambique) had created a wave of outrage against King D. Carlos. The King returned the decoration of the Order of the Bath to Queen Victoria, and offered a generous contribution for a public subscription for the purchase of warships. However, the political decomposition of liberal constitutionalism was rising, and the Republican movement expanded. Meanwhile, the city grew. With the influx of great European fast trains, it was slowly becoming a Cosmopolitan capital, welcoming illustrious personalities used to the luxury of the new Parisian hotels.


Lisbon did not lag behind. On the 10th October, 1892, the opening of the Grande Hotel Internacional (Great International Hotel) takes place, in all splendour, under the management of Edmundo Eloy. The original project (with less than one floor) established an interesting connection between the Station and the Restauradores Square, through an interior gallery, which was later removed. The view was magical: to the North, an immense avenue, named Liberdade (Liberty) six years before, when the prince D. Carlos was married to D. Amelie d’Orléans; to the South, the Tagus, and the city’s downtown, dated from the era of the Marquis of Pombal; to the East, the old string of houses of the Castle’s neighbourhood, leaning imposingly from above a hill.”