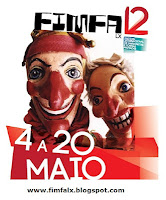 The International Festival of Puppetry and Animated Forms - FIMFA Lx is one of the most important festivals of puppetry and theatre in Portugal. Running since 2001, the festival is organized and produced annually by the puppet company A Tarumba - Teatro de Marionetas.
FIMFA Lx is an artistic project, open to new tendencies, of international dimension presenting an artistic and technical high level programme, with a very contemporary point of view. The Festival won the 2010 Critics Award given by the Portuguese Association of Theatre Critics.
Since its first edition, confront and innovation are characteristics of this event, by presenting a programme that combines the newest technologies with the most traditional puppet companies, and projects with very elemental techniques, performed in an experimental and contemporary way.