Dry Martini – Cocktail of the Day

We can say that the history of this cocktail is a mystery, from its official conception to its ingredients and quantities, this drink is part of stories that combines great names in literature, film and world politics. 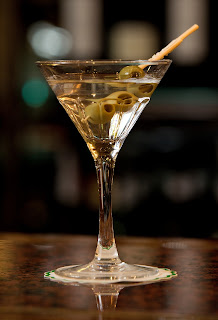 Our known Dry Martini can be an evolution of a cocktail called Martinez created by Jerry Thomas in the 1800s, the closest mixture to  our current cocktail, in what concerns the ingredients. It is full of mysteries and appears in the book of Jerry Thomas, considered one of the first, if not the first book on drinks, in the entire world. This bartender would have created the cocktail at the request of a customer who, after putting a gold nugget on the counter, asked for a special drink. This request would have happened while the traveler was on he’s way to the town of Martinez, California. Despite the opinion of its be similarity in ingredients, as we said, the flavor was maybe somewhat different, since it contained Old Tom Gin, with a bite sweeter taste, than the London Dry used nowadays.

Another story told is that in 1910, in a New York hotel, John D. Rockefeller asked the barman John Martini for a cocktail simple, yet dry and got a mixture of gin and vermouth in a shadow of a glass with an olive in it.

The interesting part is not only the multiple stories of its creation, but also the recipe which appears with different amounts of vermouth and gin. Some say that this drink should have equal parts of gin and vermouth. Others have said that the real (if not the perfect) Dry Martini has more vermouth than gin or even that the dosage of vermouth should be nothing more than a shadow of the bottle of gin, as Hemingway, the American writer, fan of this mysterious cocktail, once said.

But the top question is placed after you decide the ingredients’ quantity, a question which requires a quick answer. Shaken or stirred? You may already have heard that whatever the preparation method, the cocktail will have the same result. And as some experts say this cocktail should be stirred, for chemical reasons, as its particles should not be broken so that the taste is not altered.
Who knows if this is the reason why the world's most famous spy, Mr. Bond, James Bond prefers his Dry Martini shaken and not stirred?

Dry Martini, "the only American invention as perfect as the sonnet“ H. L. Mencken