The second part of a short story from one of the most important streets of Lisbon, strolled up and down by thousands of tourists that visit Lisbon every year.

We have talked about trade but we cannot forget the financial history of the city which has a very strong presence along this street. The "GOLD" was always the guarantee of money so this “union” is no wonder.
Rua do Ouro, spreads establishments where money is the core business. The Bank of Portugal was born in 1846 from the merger of Banco de Lisboa (1822) with the National Trust Company (1844), having as its first president Conde de Porto Covo da Bandeira. 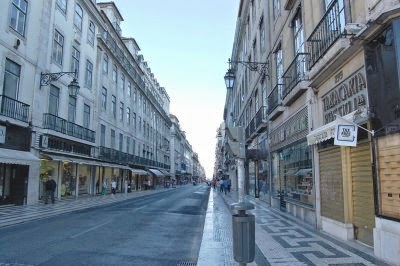 After a fire which destroyed their office at the Town Hall building, they moved to the corner of Rua do Ouro and Rua do Comércio. In 1868 they bought a building which they still occupy and in which the Bank was already working in 1870. They didn’t cease, however, to buy the adjoining properties in all directions, including the Igreja São Julião, so that they could own the whole block.
Other Banks “were born” and “perished”. Stories of bankruptcies and mergers enrich the financial memory of Rua do Ouro.

A very beautiful building made for Banco Lisboa & Açores situated in pair side of the street, a risk from the architect Lino Ventura, with four marble columns, two lion’s heads and three magnificent balconies which we can still admire. This Bank, established in 1875, went to that location in 1907.

At night the street turns into a desert, but with the dawn arises once again a privileged site to sense and measure the heartbeat of the city. The charm of Rua do Ouro  lies, as it did in the past, beyond its framework in the human taste made and unmade every day.