Lisbon’s history dates back to 300,000 years ago. However, it emerged as a nation state in the early 12th century and ranks as one of the world's longest founded cities. As the legend goes, it is a city founded and named by Ulysses as Ulissipo or Olissopo, meaning "enchanting port".
The earthquake of 1755 destroyed nearly the entire city and Marquês de Pombal rebuilt it, creating new areas like the Baixa Pombalina, a commercial area that still attains attraction.
Today, Lisbon is one of the most beautiful capitals of Europe, preserving the marks of its early splendid history.

We start today a series of articles that will emphasize the history of some of the streets of Lisbon and we will start with one very close from us. 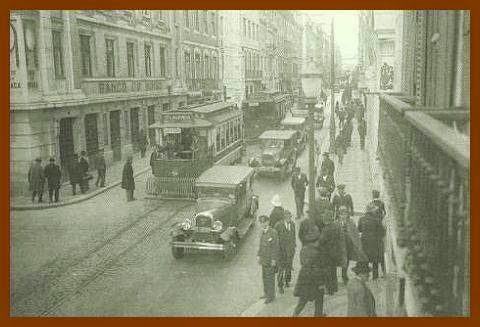 Rua Áurea (commonly known as Rua do Ouro or “Gold Street”), is one of the most beautiful streets of Pombal civil architecture, “stolen” in part to the Rio Tejo, with its buildings based on piling wood preserved by the flow of the river that floods the subsoil.

This street connects Praça Comércio to Praça Dom Pedro IV also known as Rossio. Rua do Ouro is a noble street which is always busy, sampling the best and worst of what the metropolis produces.

As it is known today the street is the result of the post-earthquake Lisbon, however, part of its route, already existed in the fifteenth century with the name Rua dos Ourives do Ouro (Goldsmith Street).
After the earthquake, the street was torn and integrated in the symmetric whole of the Baixa Pombalina. By Decree in 1760, it was determined that this street should congregate the goldsmiths of the city and that the leftover shops were distributed to watchmakers.

Since always the Rua do Ouro is a place of business activity and city life movement.
But not only from goldsmiths lived the Rua do Ouro. By advertisements on the newspaper Gazeta de Lisboa at the time, we know that booksellers, small restaurants, hostels and other honored the busy road.