These days it seems like there’s always something new popping up in Lisbon, new restaurants, new view points, but today we’re going to talk about a new garden that just opened in Graça. 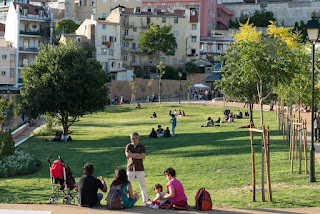 Lisbon’s Downtown and the Graça neighborhood are closer than ever.  An old dream and an 874,000 euros investment of the Lisbon’s City Council and an agreement that allowed the City Council to keep a piece of land belonging to the Ministry of Defense, brought the project Jardim da Cerca da Graça to life.

According to José Sá Fernandes this 1, 7 hectares of green space, in the heart of our historic city, will surely become "one of Lisbon’s new secrets".

In addition to the large balcony located to the left of its entrance and from which one can enjoy a panoramic view of the Castle, the Chiado and the Tagus, the garden also has extensive lawns, a small orchard, a playground and a kiosk. In addition its location allows to shorten the distance between Downtown and the Graça, walking through the Mouraria quarter.

At the opening ceremony, which took place only hours after the garden opened to the public, one could hear kids playing and screaming, which was in fact the goal of the entire project.