One of Lisbon’s most important traditions - Marchas Populares - takes place this Friday.
On the night of June 12th, Lisbon historic districts come to the street to show their creativity, their traditions and their history.

The city and especially the Avenida da Liberdade will be filled with music, color, glow and excitement in what is for many the most expected night of the year.

Every day, for months, children, young and adults give themselves to the creation of choreographies and rehearsal of dances and songs, and to the preparation of costumes and arcs that will represent their district, their pride. 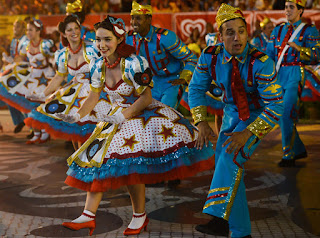 This is a tradition born in 1932, an original idea by José Leitão de Barros, organized by the Parque Mayer and with the strong support of the Portuguese regime. In the first edition, only 3 districts entered the competition, Alto Pina, Bairro Alto e Campo de Ourique.

Campo de Ourique won the first edition, but most important, the foundations of this popular annual celebration were created. In 1934, the event was “upgraded”, being organized by the City Hall and integrated as it is today in the Festas de Lisboa, with the participation of 12 districts, each one with its own march and its own theme, bearing in mind the diverse local traditions.

After a few years, the “Marchas de Populares” were embraced by the city and “sold” as the symbol of an identity that mixed urban and rural traditions. The cinema had its share of “guilt” in the promotion of this event: movies like “A Canção de Lisboa” and “O Pátio das Cantigas” were a huge publicity to a tradition that was just starting.

There are a couple of reasons for the quick success of the “Marchas Populares”, an increase of identity of each district and the competition that brought to live old rivalries between districts.

This is a music and colorful event you can’t miss!