The NOS Alive 2015 it’s just around the corner, from July 9th to 11th Lisbon will the capital of
music.

Considered by “NME” as one of the best music festivals held in Continental Europe, NOS Alive
is one of the biggest music events in Lisbon. 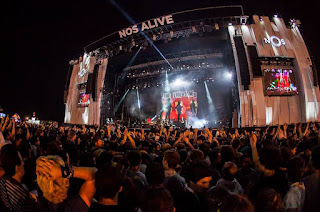 NOS Alive, formerly Optimus Alive, is the leading music festival in Portugal and has caught the
rest of the world’s attention due to a single combination of an eclectic line up, warm weather
and unique coastline location.

During its 8 years of existence, those who have visited us enjoyed fantastic line ups, including
bands such as Arctic Monkeys, The Black Keys, The Libertines, Depeche Mode, Coldplay,
Radiohead, The Cure, Pearl Jam, Beastie Boys, Smashing Pumpkins, Neil Young, Bob Dylan,
Blondie and many more.

Don’t miss the chance to attend one of the best Music Festivals in Europe.
Labels: About Lisbon Concierge recommends Cultural Events