The cycle Há Fado no Cais has this Saturday another session presenting, the fado singer Carolina, who will take the stage of the Small Auditorium at the Centro Cultural de Belém. 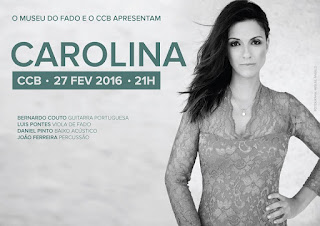 Carolina was born in Hamburg on April 12th 1984 and, at about the same time, her parents decided to return to Portugal. She was accustomed to Portuguese songs from a very early age as her father sang fado songs to her and her mother songs from the popular Portuguese songbook.

It was in a bar in Porto called “Pop” that Carolina sang fado, in public, for the first time, but where she really stood out was in two musicals by the Portuguese producer Filipe La Féria, in Porto and Lisboa, where she represented the young Amália and Beatriz Costa.

Carolina is a new generation fado singer who doesn’t disappoint and another example of young national talents making her name in contemporary fado. Her eponymous release reveals an exceptional maturity, in which the poetry of Ary dos Santos, Alberto Janes and Flávio Gil coexists alongside originals such as a composition by António Zambujo. To get under the skin of her emotion,

Carolina shall take the stage promising a celebration worthy of the praise she has recently been receiving.