What to do in Alfama

Alfama is the oldest and most typical neighborhood of Lisbon. Its name derives from Arabic al-Hamma (الحمة), which means baths or fountains.

Alfama is a very peculiar neighborhood, resembling an old village, not only for its architecture but mostly for being a small and closed community. Although, in recent times the neighborhood community changed a bit, mostly due to the phenomenon Airbnb. 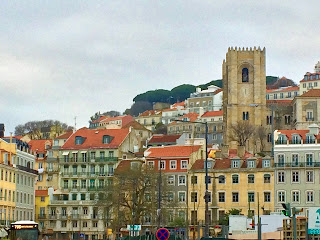 This new event brought new residents to the district, and “forces” owners to restore their properties, renewing this secular neighborhood and giving it a new life.

Visited daily by Portuguese and by foreign tourists, Alfama is famous among other things for its Fado houses and for the viewpoint Santa Luzia. The neighborhood has its highlight during the Santos Populares celebration, especially on the night of Santo António, from the 12th to the 13th of June.

We have gathered a list of places not to be missed in Alfama:

Sé Catedral
Built in the second half of the twelfth century, the Sé Catedral (Lisbon’s Cathedral), is one of the most important landmarks of Lisbon.
Constructed after Dom Afonso Henriques had taken Lisbon from the Moors, it stands on the site once occupied by the city’s main mosque. The Romanesque building that we see today is a mix of various architectural styles due to the several renovations that occur after the earthquakes.

São Jorge Castle
This is a hilltop castle from the Moorish era, captured by Portugal’s first king, Dom Afonso Henriques, in 1147. Restored in 1938 the castle offers some of the most attractive viewpoints of Lisbon.

Museum Teatro Romano
A Roman amphitheater from the 1st century BC lurks beneath the buildings just above Lisbon’s Cathedral. Not a lot has yet been excavated, but it seems to have been large, holding up to around 5,000 spectators.

Santa Luzia Viewpoint
One of the most well-known Lisbon’s viewpoints, near the Largo das Portas do Sol, has all the proper trappings, including a pergola with tiled pillars, walls, and benches forming a veranda for the view.