One of Lisbon's iconic transports is the Tramway, and Tram 28 is the most famous due to its route. These trams have been around since the early 1900's and still maintain the same charm of the beginning, inspite of the new and modern ticket system. 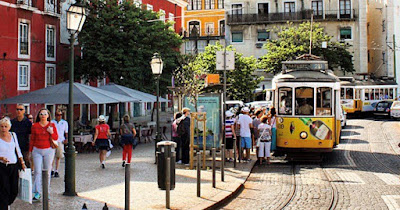 28 is part of Lisbon's Tram route, and it is mostly used by tourists who wish to experience Lisbon in the most traditional and historical way. It cruises the city throughout narrow streets that are difficult to reach, even by car. It touches a couple of landmarks of Lisbon's history, places such as St. George's Castle, Sé Cathedral and Estrela Church.

The route goes between Prazeres and Martim Moniz and here is where we start our ride. This stop is not far from our Hotel, just a few walking minutes, very easy to get to.

The first meaningful and historical stop is the Church São Vicente de Fora, designed by Fillipo Terzi, its construction started in 1582 and finished in 1627. Then Feira da Ladra where you can find antiques and second hand items.

The Tram keeps rolling down the narrow Calçada de São Vicente until it reaches the Portas do Sol and the belvedere Santa Luzia which enjoys the beautiful sights of the Tejo river and from where you can simply get to  St. George's Castle.

The next stop is Sé Cathedral a landmark of Lisbon's foundation after the conquest to the Moorish. Downhill and pass St. Antonio's Church and through Downtown Lisbon rebuilt after the great earthquake of 1755.

Now, it will start climbing another hill to the Chiado District where you can find Café Brasileira and S. Carlos Theatre continuing through Camões Square and then Calçada do Combro, where you will find the access to the Bica lift.

The ride continues through narrow streets of simple houses until it reaches the National Parliament in São Bento. Now, it is time to climb the Calçada da Estrela and on the top you may see Basílica da Estrela a landmark built in the XVIII century.

The route is now near its end, through the fancy district of Campo de Ourique until the last stop in front of Prazeres Cemetery.

As you can see a ride that you can't miss, with a piece of advice: watch out for pickpockets. Unfortunately, they exist and are present on this Tram. Don't let them ruin a perfect ride.
Labels: Concierge recommends