One of the most important avenues in Lisbon is also the core of haute couture stores in the city, offering also a large and new variety of snack bars.

Av. da Liberdade was built after the big earthquake in 1755. At the time was called "Public
Promenade" and despite the name, it was surrounded by a wall and was accessible just for aristocrats. Only in 1821 after the Liberals came to the government it became open to the general public.

The avenue that we can see today was built in 1879-1892, with the same style as the Champs Elysées in Paris and it became the center of parades and local festivities

The Avenue itself is filled with hotels, cafes, theaters, and cinemas, but the last couple of years has been the heart of haute couture in Lisbon with stores of most of the great designers such as Louis Vuitton, Prada, Dolce & Gabbana, Armani, Todd's, Burberry, Armani, Adolfo Dominguez, and Ermenegildo Zegna 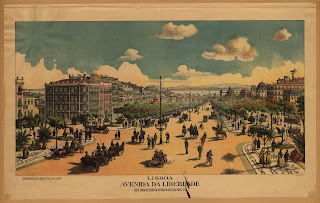 And, to take advantage of the large sidewalks, several snack bars were installed in typical Lisbon quiosques, each with its own specialty. Bananacafe, Hot Dog Lovers, Lisbon on Wheels, Quiosque Ribadouro and O Melhor Bolo de Chocolate do Mundo are some of the offers.

You can try one every day without getting bored.

This is the scenario for a perfect afternoon, shopping in haute couture stores and a snack on one of the most emblematic avenues of Lisbon.
Labels: About Lisbon See it from your room